A change in behaviour in older dogs can often indicate an underlying health issue and one that is often missed is deterioration in eye sight. It's so easy to miss because most sight loss is gradual and dogs are very good at mapping out environments that they're used to. You'd think that a dog with sight loss would bump into things and have trouble finding things, but that isn't always the case (unless the sight loss is sudden).

Other things can suggest that a dog's sight may not be as good as it was. Heightened responses to noises and more alarm-barking can happen when a dog can't see as well as he could.

Dogs who start to lose their sight can seem a lot less secure than they were, show signs of anxiety and can start to cling to family members, both human and animal. 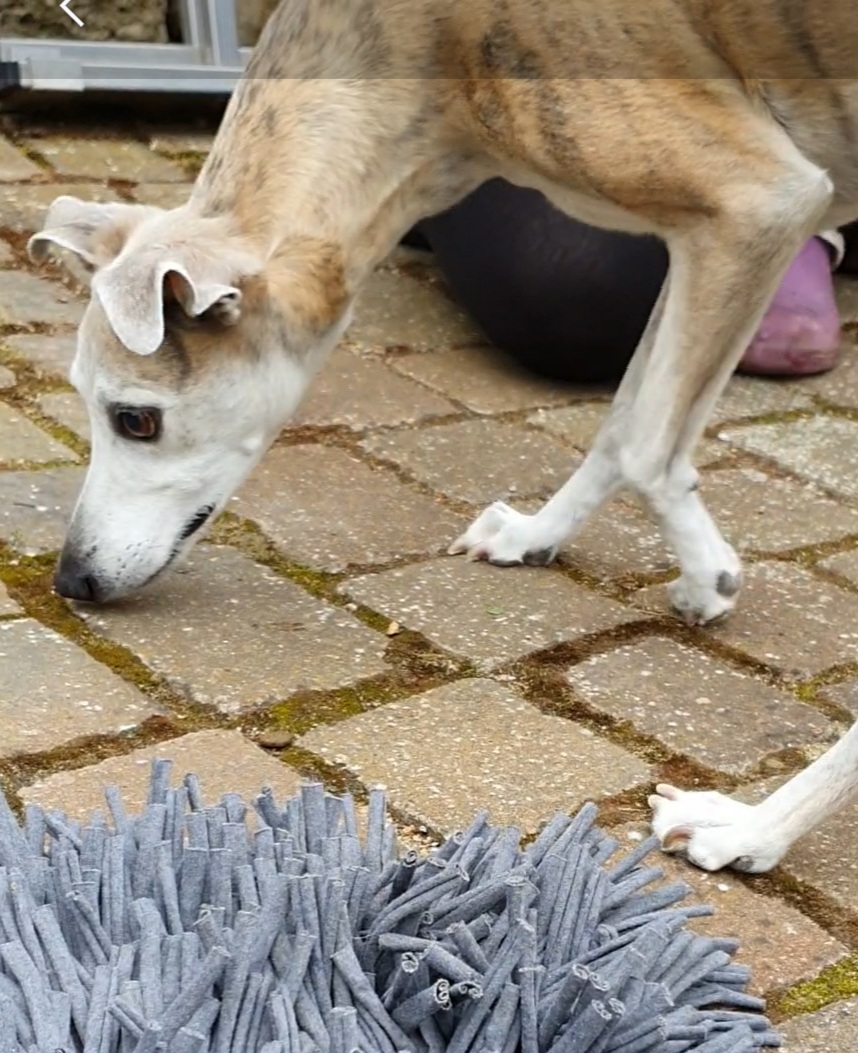 Basil lost his sight completely in a matter of weeks and his mum was quick to notice it. He became very reliant on both her and his housemate, Cyril, and struggled to be on his own. He found it hard to orientate himself and started to sleep a lot more.

His mood plummeted and he showed signs of depression. What was interesting was that he came to rely very heavily on his mum to show him where things were and he didn't activate his other senses to compensate for the sight loss.

He almost seemed to lose his capacity to sniff - even though he's been working with us for several years and has done a regular amount of sniff activities to boost his mood, he just stopped using his nose.

His mum was understandably helping him out if he couldn't find treats or water, but what this did was make him overly reliant on her so that he became almost helpless without her. 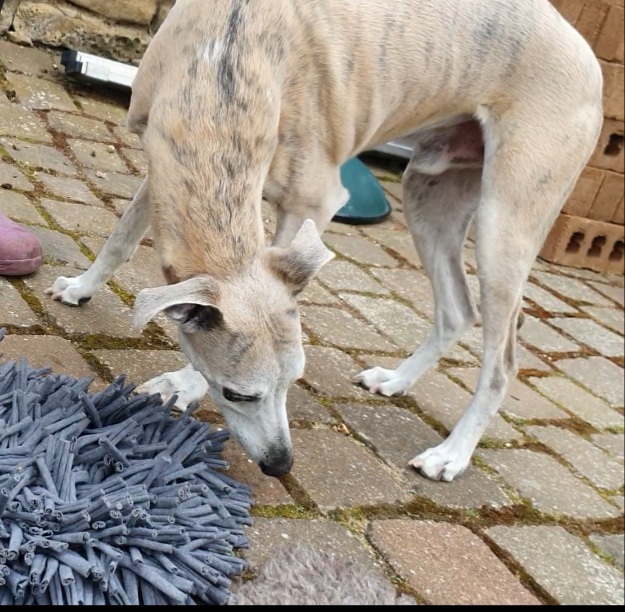 He couldn't even sniff treats in a snuffle mat when I went to see him - all he did was wait for a treat in his mum's hand, which she put right against his nose, followed it to the floor and could only take it from her hand itself. If she put it on the floor, he gave up. Even if it was right under his nose.

Dogs often miss treats scattered on the floor at close quarters anyway - they have poor short sight and tend to use their whiskers to locate anything at less than 5cm away. If you watch a dog sniffing for a treat, they will often skim over it several times before finding it.

But most dogs will keep sniffing until they've found it. Basil wasn't even trying. His mum had wanted to help her boy out and make life more manageable for him, but the result was a dog who had lost his capacity to problem solve and do things for himself.

When dogs use their noses, they fire up the pre-frontal cortex of the brain (the 'thinking' part) Dogs who are able to problem solve and who have easy access to the thinking bit of their brain tend to be calmer, more healthy and more resilient. Teaching dogs who are losing their sight to become better at using their noses and brains means that their quality of life improves dramatically.

When a dog loses his sight, he relies heavily on what he knows of his house and garden, so Basil's mum has taken care to ensure that things have stayed the same. She has removed things that he may trip over and was originally going outside with him to help him with steps so that he could work out where they were - his sight suddenly degenerated (possibly with Sudden Acquired Retinal Degeneration Syndrome, which can often occur in whippets) and he was stumbling into things because he couldn't see where anything was.

Some dogs lose all interest in their walks when their sight deteriorates, and it's important that we listen to what they're telling us. For walks to be enjoyable, and for an older dog to feel confident, they need to be able to choose their pace and direction as much as possible. Many older dogs with failing sight will be happy to nose around just outside the house for 20 minutes or so, and that will be enough for them. Avoid pushing them to walk further than they feel comfortable with, because they are likely to become anxious about going out. Giving them choices over the pace and direction they go at increases confidence and helps them trust that we are listening to what they feel able to do. Moth, my older boy, really lost confidence on walks and we found that he was happiest with his little sister, so he generally only walks with her these days. We keep to the same route and have stopped taking him on any treks out to new places because he can't cope with them any more.

If your dog is panting excessively with a tongue that sits quite high in his mouth, and if his ears are set back on his head, then he is feeling stressed and the walk isn't enjoyable. If he sleeps very heavily when he gets back, or if he licks his paws excessively, these are signs that he struggled on the walk. Keeping to a familiar route and not going to far is likely to make his walks an enjoyable part of his day. It's also advisable to keep a dog who is losing his sight on a long lead so that he still has some freedom, but is safely near you if he needs helping out.

We avoid other dogs now, when we take Moth out. He has always been very good with other dogs, but he is uneasy about anything bouncy and I don't want him to feel tense that he's going to be randomly pinged at by either dogs or people when we're out, so we avoid them and walk in a very isolated, lovely spot where he won't need to deal with anything that makes him uneasy.

HELPING A BLIND DOG TO USE HIS BRAIN

As for Basil, we needed to get him sniffing again, so we used sound because he seemed to be using his ears more than his nose. We cued him with "find it" before releasing a treat held in the hand. Then we started dropping hard treats on the hard floor so that he could hear them land. When he went to sniff them out, we added the cue "find it". 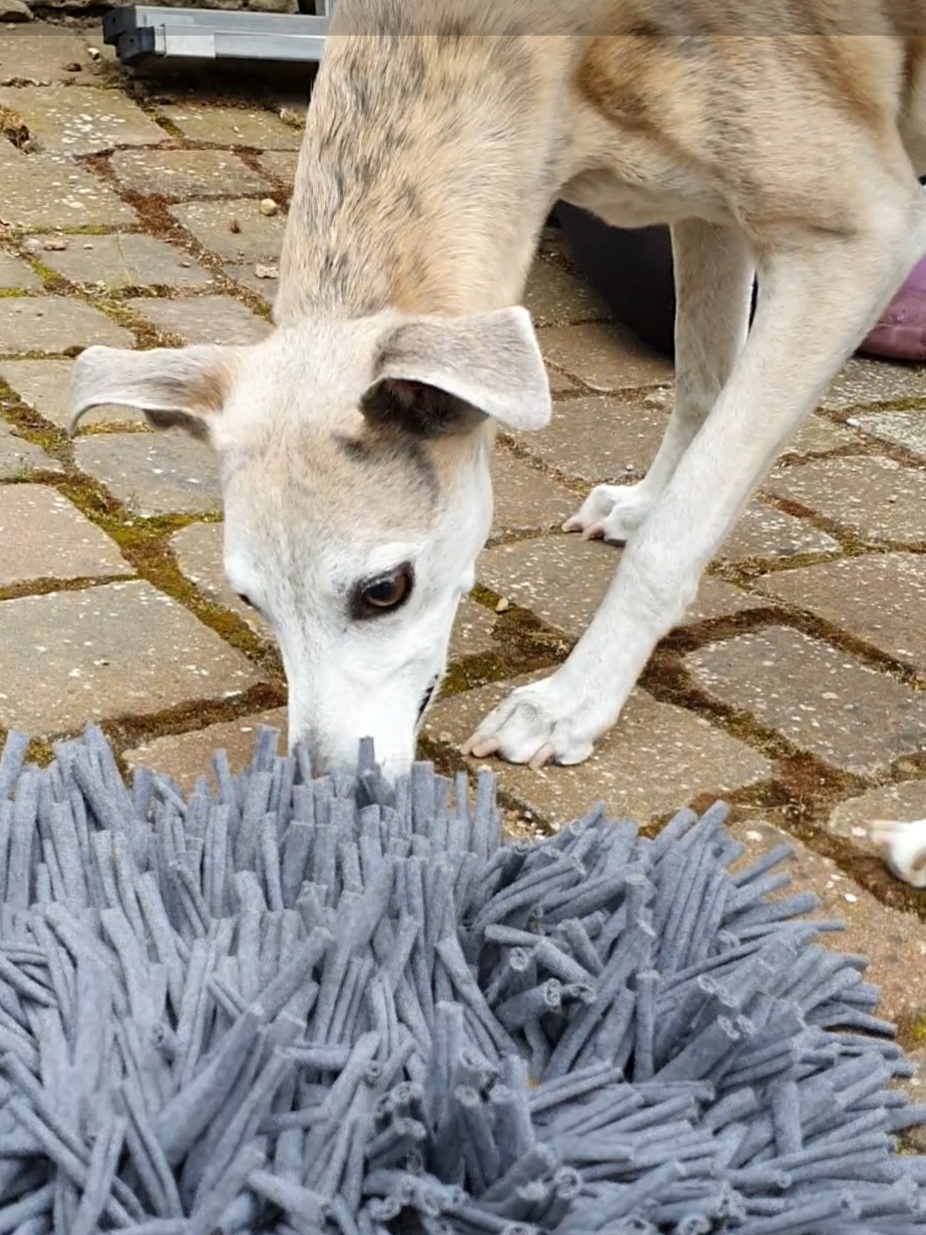 He understood quickly and started picking one treat up from the floor, but still struggled to sniff out any more. Even if we put two next to each other, he would still pick up one and leave the other.

THE CALM OF THE SNIFF!

We wanted him to learn to enjoy sniffing again because, as well as boosting the thinking part of his brain, sniffing also lowers the pulse rate. Once this bit of the brain is engaged, a cocktail of "happy hormones" are released and we'll be able to help lift Basil's mood.

It took him a little while, but Basil gradually started using his nose again in our session. I hadn't expected we would be able to teach him to use his new snuffle mat at the start because he was struggling to sniff anything at all, but by the end, he was listening to his mum's "find it" cue and seeking out a small handful of treats placed close together on top of the mat.

As the days have gone on, his mum has hidden them more deeply in the mat. He has had more restful sleeps and been less clingy since he's learned to use his nose again. Giving him back his independence is creating a happier, more confident boy. 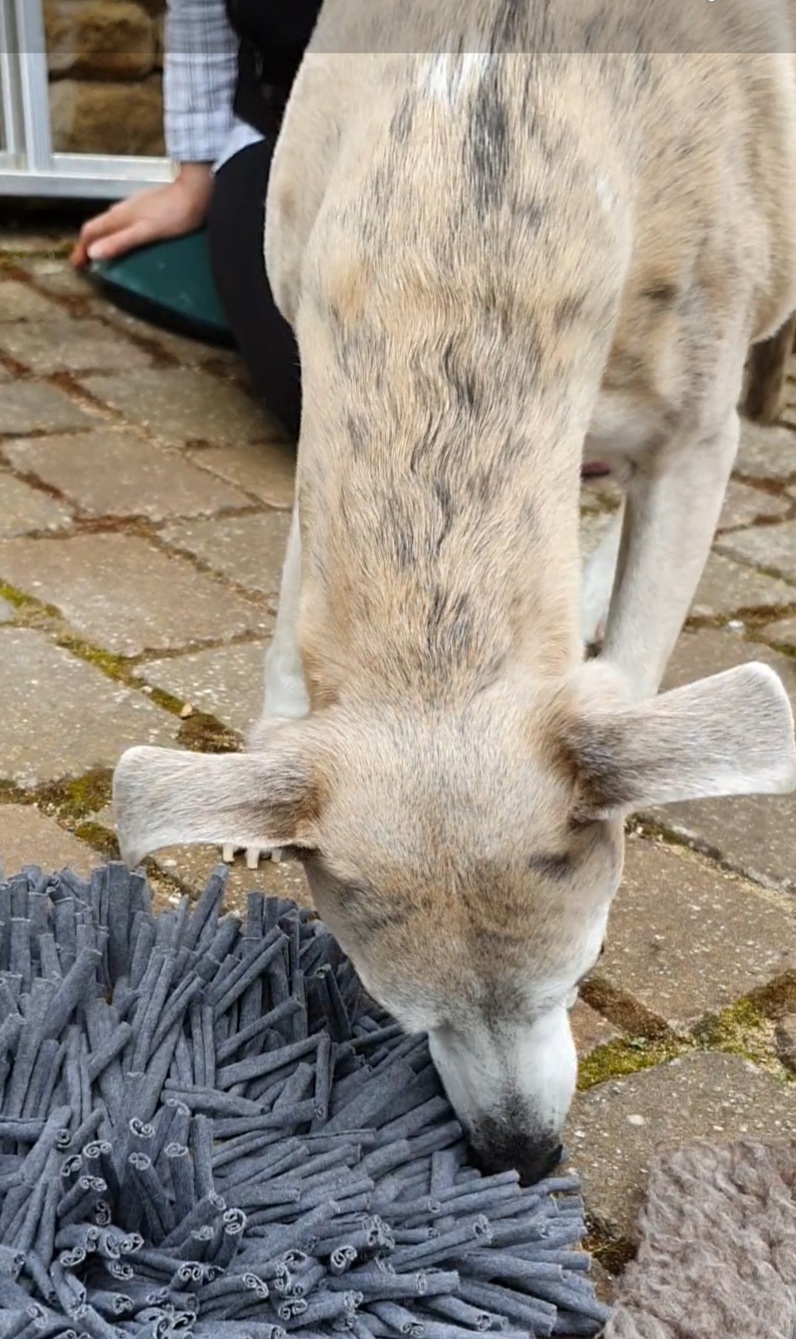 HOW CALM IS THINKING-DOG CALM?

HIJACKED BY A STAFFY DOG

SELF ISOLATION AND DOGS

ANXIETY AND GRIEF WHEN LOSING A SOUL MATE